the conditions we’ve set up for ourselves 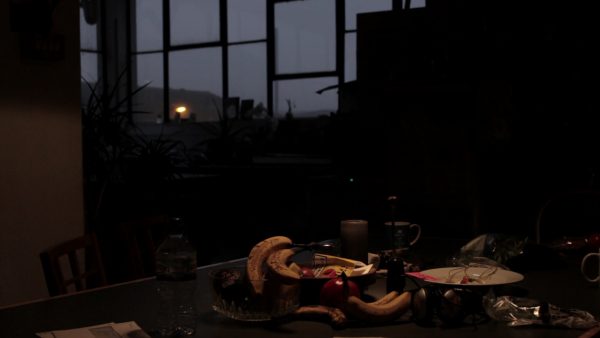 Alice Gale-Feeny’s video work ‘the conditions we’ve set up for ourselves’ (2015-2016) was produced during and after a residency with STORE, a London-based association of around twenty artists, architects and designers. At the time of the residency, in 2015, the group were operating without a fixed location, coming together for communal dinners which doubled-up as meetings and were held in the houses of each associate – part of a long-standing tradition within the group.

Drawn from audio and video recordings made at these meetings, a number of tables within the various kitchens are the surface upon which food is prepared and eaten – an activity that acts as a catalyst for subsequent discussions. These conversations revolve around the situation they are in, their search for a permanent space and the negotiations involved in preparing food for a large number of people. On top of this, attention is given to the different perspectives amongst the architects and non-architects within the group, and the extent to which this influences their understanding of the buildings they are sat within.

This is the first of two works (the second being ‘From where I’m sitting’) to draw from the research of Philippe Boudon (b.1941), a French academic who interviewed the inhabitants of the 1920s housing project ‘Quartiers Modernes Frugès’ in the south of Bordeaux for his book ‘Lived-in Architecture: Le Corbusier’s Pessac Revisited’ (pub. 1972). Originally designed by the architect Le Corbusier (1887–1965) as homogenous, functional and low-cost containers, they became known for having been heavily altered by their inhabitants.

Join Alice for an active sharing of knowledge and experience – felt, taught, factual, speculative – relating to living and working individually and in community.