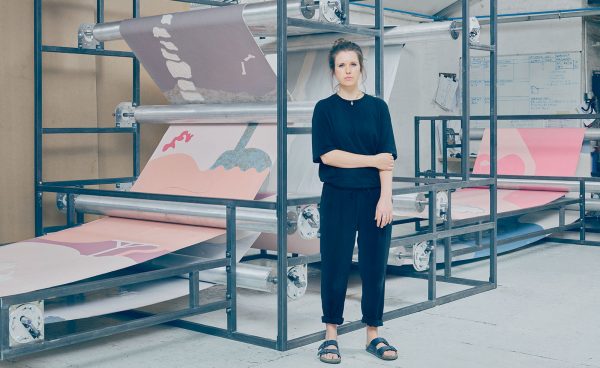 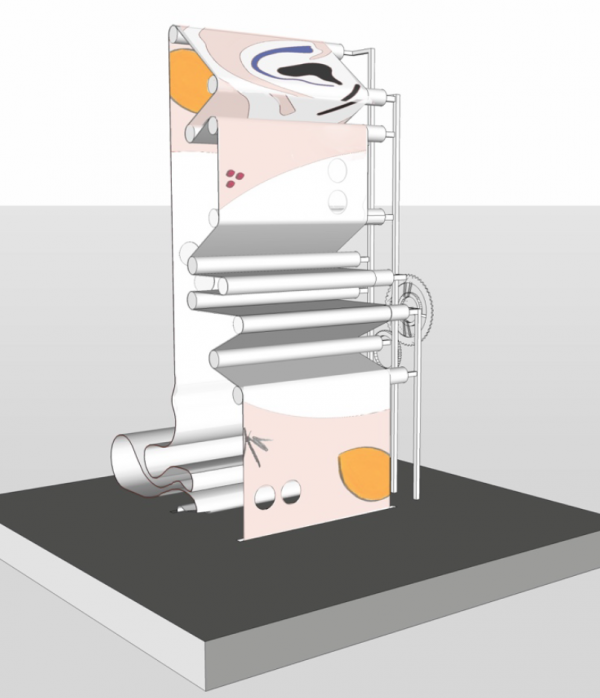 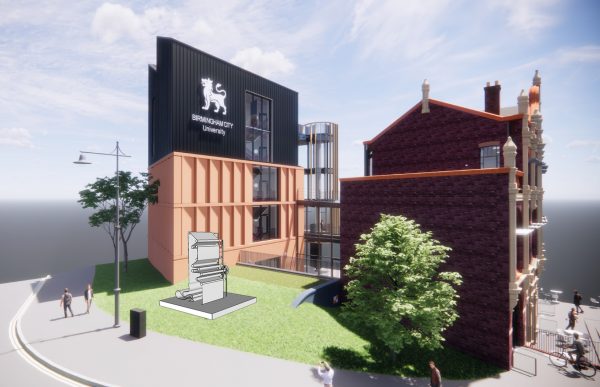 Holly Hendry has been commissioned by Birmingham City University to create a new public artwork to celebrate Birmingham as a place of innovation and mark the latest phase in the £70 million regeneration of the historic Belmont Works building that will be the new home of the University’s STEAMhouse project. Eastside Projects has worked closely with the University to select the artist playing a key role as curator of the project.

Made from steel, aluminium, plastic and Jesmonite, Hendry’s 10-foot tall sculpture has been designed to reflect the key principles of STEAMhouse – exploration, collaboration, conversation, openness, and newness. The sculpture’s looped form and design details nod to the industrial vernacular of jacquard looms, analogue assembly lines and printing presses that have been features of Birmingham’s industrial past.

The surface design of the artwork features bodily shapes co-developed with pupils from Chandos Primary School in Highgate and Birmingham City University students through a series of ‘exquisite corpse’ drawing and collage workshops. The sculpture will be produced through a variety of artistic and industrial techniques ranging from welding, laser cutting and painting. By transforming mild steel so it appears fluid and in tension, like a rubber belt, Hendry hopes to play with audiences expectations of the material properties of metal, presenting its malleability usually only glimpsed during the fabrication process.

The sculpture will be situated outside of the 122-year-old Belmont Works site in the Eastside of Birmingham, which is currently undergoing a transformation into the new home for the University’s STEAMhouse project.

Set to open later this year, the building will serve as a base for artists, academics and technical specialists to collaborate on new ideas, become the new site for the University’s School of Computing and Digital Technology and provide opportunities for students from across the institution to work with businesses. Once installed the artwork will pay homage to Belmont Works’ history as the former Eccles Rubber and Cycle Company Headquarters as well as its future use as a centre for collaborative innovation.

Holly Hendry’s work has been exhibited across the UK and internationally in places like The Liverpool Biennial, Yorkshire Sculpture Park and the Baltic Centre for Contemporary Art. Last year she presented Invertebrate; a composite form that wormed its way around the outside of De La Warr Pavilion, a major outdoor commission made in collaboration with England’s Creative Coast and part of the Waterfronts Commissions. She currently has a solo exhibition at Stephen Friedman Gallery in London.

The artwork launch will coincide with the opening of the new STEAMhouse building later this year with a public talk by the artist.