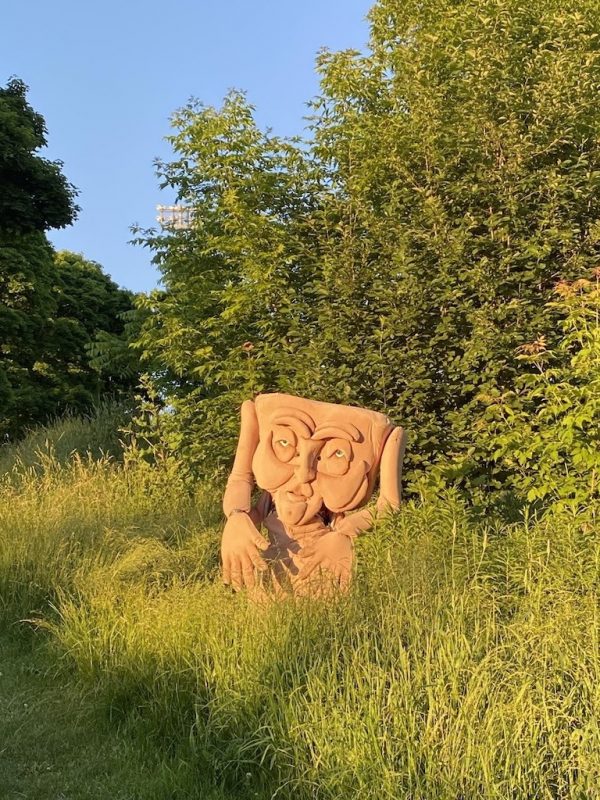 We are looking for performers to take part in Jon McCurley’s Monsters of the World – Sighting of Blemmyes project.

The performances will take place outdoors on Saturday July 2nd and Saturday July 9th in green spaces around Bournville in Birmingham.

We are looking for six people between 5’5” and 6’0” tall. All genders are welcome, people of Global Majority heritage are particularly encouraged to apply.

Acting, dancing, or clowning experience is a plus, but not essential.

Each performer will be wearing a large monster suit that looks something like an alien or troll. It is built like the mascot style costumes used for sports events, and composed of big padded muscle trousers, oversized dino shoes, and an upper body with extra long arms. The body is supported by an internal plastic structure, worn like a backpack, with a combined weight of approximately 4-6Kgs

Performers will be inside a suit with less than normal visibility, they will be wearing oversized foam boots, and will have to enter the costume by raising their arms over their heads.

Performers will be improvising in pairs or solo on a series of directed simple movements, such as standing, walking, hiding or watching people.

The performances will be broken up into 10 minute shifts followed by 20 minute breaks, and this pattern will continue for 4-5 hours each day.

To apply please send an email introducing yourself to tim@eastsideprojects.org

Jon McCurley is a performance artist from Toronto, Canada. He has been making performance work since 2006 and has also worked as a puppeteer and a film and theatre director.

From Indian and Ancient Greek Myth, the project recreates a monster known as a Blemmyae. It looks like a human except its head is in the centre of its chest. Sometimes 12 feet tall, sometimes made of gold.

It was apparently spotted by European explorers during the ‘Age of Discovery’ in every continent around the world, in numerous countries. The ongoing tale of their existence helped to justify exploration and colonisation during that period. The British, Dutch, and Portuguese established colonies wherever the Blemmyae were said to have been seen.

The performance is a recreation of the lie that explorers would tell upon returning to Europe – that they happened upon a paradise-like garden and in it they saw Blemmyes relaxing, tending the trees, or walking across a field.

The work is an investigation on the origins of ‘the outsider’ and ‘the other’ within the western world, and draws links between the ‘Age of Discovery’ and the unbalanced Globalisation era we live in today.