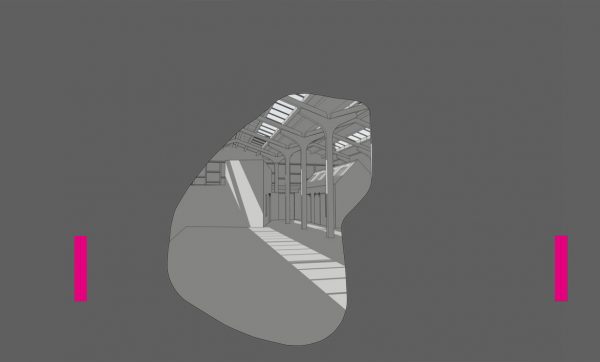 Please join us to test out another reality.[1]

Eastside Projects have been working on an artwork for ten years.[2]
We call it an artist-run multiverse.

There is a building at 86 Heath Mill Lane, in Digbeth, Birmingham.

And there are lots of people – artists, curators, designers, engineers, plumbers, policymakers, guests and all kinds of whatnots.

Together we support and care for art, artists, our city of Birmingham, and the world.
We are, after all, the public who make art.[3]

All of these things are part of the artwork.

A lot of love and care is put into the floors and walls, lights and sounds and, over time, as the layers accumulate, the gallery begins to tell stories too.

But sometimes the multiverse doesn’t quite do what you expect, and one day the building tells an unexpected story and breaks down.[4]

And artworks change, fall apart and get put back together in new configurations.

We have been reimagining, reconfiguring and refitting the artwork[5] … our home … the gallery that is many things … with the artists, curators, architects, designers and engineers, the rappers, electricians, policymakers, guests and all kinds of whatnots.

Another Reality awaits you.[6] Everyone is welcome.[7]

[1]  Eastside Projects’ gallery space at 86 Heath Mill Lane will relaunch with exhibitions by Mixrice and General Public on Friday 1st June, 6–9pm. Seoul based collective Mixrice’s first solo exhibition in the UK is part of the Midlands Korea Season which is led by New Art Exchange and Eastside Projects. The MKS creates a platform for contemporary visual arts from Korea, with a focus on artists who explore issues of migration, borders, and displacement. The exhibition is part of Korea/UK 2017-18, a national celebration of British and Korean art and culture funded by Arts Council England and Arts Council Korea and is co-produced with the Korean Cultural Centre UK. Birmingham based artists General Public will present a newly commissioned video work called The Endless Village, a dark and banana fuelled science fiction satire and sitcom set in Kingdom#3 of an imagined post-EU Britain.
[2]  In September 2018 Eastside Projects will celebrate its 10th Anniversary. Since 2008 the organization has commissioned and presented over 90 exhibitions, public art works and projects in Birmingham and beyond; produced sector leading artist development programmes including ESP, Three Phase and the Syllabus and developed STEAMhouse, Birmingham’s new centre for creative innovation, in partnership with Birmingham City University.
[3]  Working closely with Birmingham City University, Arts Council England, Custard Factory and K4 Architects, the founding artists of Eastside Projects have led the next stage in the evolution of a public gallery as a long-term artwork creating a unique exhibition space for Birmingham.
[4]  86 Heath Mill Lane was unexpectedly closed in June 2017. We have worked with our partners to both solve the problems of the building and look for ways to improve what we do, and Birmingham City University has funded the new refurbishment and reconfiguration, investing in our partnership to create a new gallery, a venue, an open space, an also space, a support structure for us and others.
[5]  The gallery refit includes Another Reality, Eastside Projects new also-space; a new front desk/kitchen/bar; reconfigured lighting; new office pavilions; new soap and soap holders by Emily Atkinson; new building façade commission by Hardeep Pandhal; plus a new storage area, reconfigured Second Gallery, new fire exit and loading bay.
[6]  Another Reality is the name of Eastside Projects’ new also-space at the front of the gallery and the title of artist Celine Condorelli’s new large scale curtain work as part of the refitting of the gallery. This space will be used for events, gatherings, working in, performing in, and hosting other individuals, groups and organisations who need interesting places to make things happen.
[7]  Eastside Projects is an artist run multiverse which aims to survive, support, attract attention, centre the artist and make civic space. It receives Arts Council England National Portfolio Funding (2018–22), in partnership with Birmingham City University.
[8]  Eastside Projects’ front door handle, an artwork by Matthew Harrison made for our opening in 2008, will be reinstalled for the relaunch. It’s title is Bienvenue. Welcome. C‘mon in. and it is made of a range of timbers: African Ebony, African Padauk, American Black Walnut, American Cherry, Ash, Beech, Brazilian Tulipwood, Bubinga, Cuban Mahogany, East African Pau Rosa, Lacewood, London Plane, Maple, Mopane, Pink Ivory, Purpleheart, Pau Amarelo, Santiné Bloodwood, Violet Rosewood, Wenge, and Zebrano.
We use cookies on our website, by using eastsideprojects.org you agree and accept our Privacy & Cookies Policy. Accept Reject
Privacy & Cookies Policy