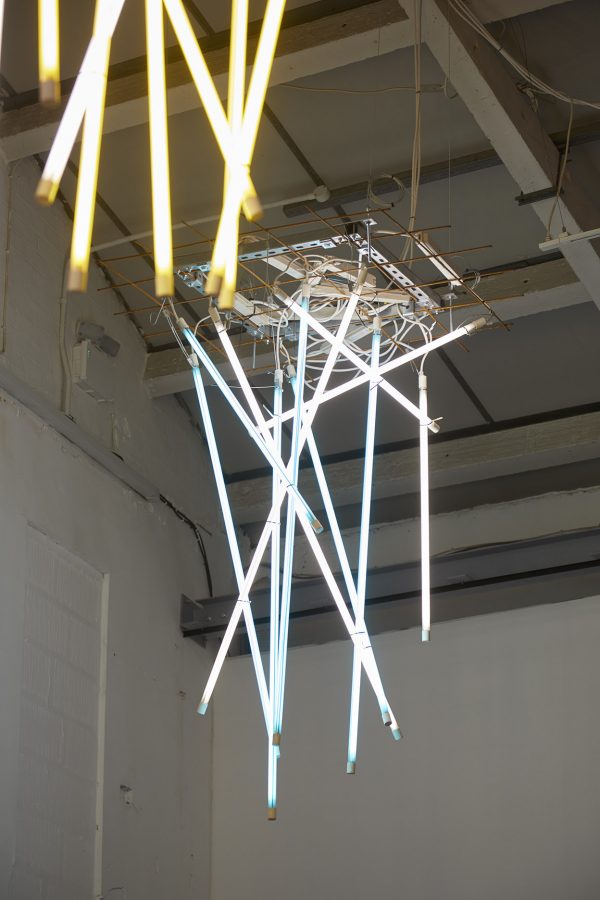 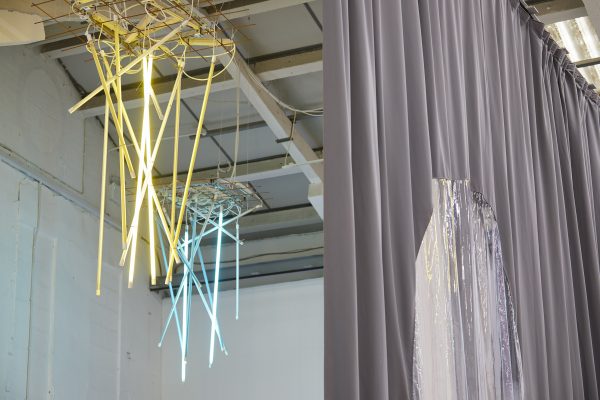 The three large hanging lights within Another Reality are Gavin Wade’s Reconfigured Functional Configuration (LFR/FWB/ECP)2018 which are an upcycled version of Wade and Condorelli’s light, Functional Configuration’ 2008, made as part of the original renovation of Eastside Projects. Each of the three lights has a subtitle that Wade has selected from recent news stories revealing symptoms of societal breakdown within the UK. The blue and yellow light is a reference to El Lissitzky’s Abstract Cabinet 1926/1930 a room made as an artwork to display other artworks where he painted the transparent ceiling blue on one side of the room and yellow on the other.

The full title of the work is:

After 52 years in the UK, Anthony Bryan was shocked to be told he was in the country illegally and faced forced removal. Earlier this month he was sent to an immigration detention centre and booked by Home Office staff on a flight back to Jamaica, a country he left when he was eight and not visited since. The case is the latest in an emerging scandal over the Home Office’s brutal treatment of a number of long-settled, retirement-age UK residents who are being aggressively pursued over their immigration status.

Agreeing to have sex with someone under the pressure and fear of homelessness, or in exchange for the basic right to have somewhere to live, does not equate to agreeing by choice.

Teachers have told of washing uniforms, buying shoes and providing tampons for students from households that are being hit by worsening poverty. A headteacher from Portsmouth kept his school open during snowstorms because “I was really worried about the number of children who wouldn’t get a hot meal that day.” Other teachers have told of having to fill in the gaps being left by councils and social services budget cuts, from paying for parents’ counselling to handing out food parcels. In a survey of 900 teachers, 60% said child poverty in schools had worsened since 2015, and one in three said it had got significantly worse.