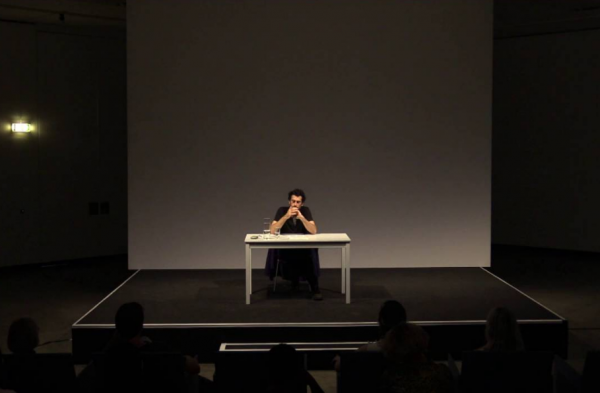 Raimundas Malasauskas reads An Address Concerning My Supposed Existence by John Menick and attempts to illuminate the process of creating a full character. www.rye.tw

Raimundas Malasauskas, born in Vilnius, is a curator and writer. From 1995 to 2006, he worked at the Contemporary Art Centre in Vilnius, where he produced the first two seasons of the weekly television show CAC TV, an experimental merger of commercial television and contemporary art that ran under the slogan “Every program is a pilot, every program is the final episode.” He curated “Black Market Worlds,” the IX Baltic Triennial, at CAC Vilnius in 2005.

From 2007 to 2008, he was a visiting curator at California College of the Arts, San Francisco, and, until recently, a curator-at-large of Artists Space, New York. In 2007, he co-wrote the libretto of Gellar Door, an opera by Loris Gréaud produced in Paris. Malasauskas curated the exhibitions “Sculpture of the Space Age,” David Roberts Art Foundation, London (2009); “Into the Belly of a Dove,” Museo Rufino Tamayo, Mexico City (2010), and “Repetition Island,” Centre Georges Pompidou, Paris (2010).

Currently he works as one of the agents of dOCUMENTA 13. His other recent projects: Satellite 4 series at Jeu de Paume Museum, Paris, Hypnotic Show and Clifford Irving Show, are ongoing.