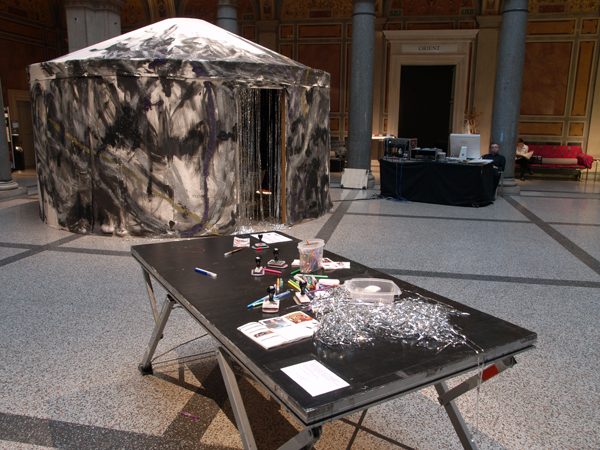 In ‘Reverse Karaoke’ Kim Gordon aims to demystify the process of music making. Drawing on the DIY nature of her musical history with her band Sonic Youth, Gordon invites visitors to record their own track along to the pre-recorded sound of her voice. “I always liked the idea of a disembodied voice in a space.” Gordon said about ‘Reverse Karaoke’, ‘Coming from a DIY punk context, it’s important for me to show how easy it can be to make music.’

You are invited to play the instruments and record your own music with Kim’s voice within Junta Koether’s painted environment. The track is recorded live by a sound engineer who burns two CD copies of the track, while visitors decorate the CD sleeves. One copy of the CD becomes part of the piece itself on display in a record box, and the other the visitor takes home.

‘Reverse Karaoke’ was commissioned by Electra for ‘Her Noise’, South London Gallery in 2005, and has since toured Europe extensively and been exhibited at Magasin-CNAC, Grenoble, France; MAK, Vienna, Austria and Wysing Arts Centre, Cambridge, as well as being included in the major touring exhibition ‘Sonic Youth Etc.: Sensational Fix’

Celebrating 10 years of adventurous music, Supersonic Festival 2012 highlights include a special collaboration of the unique and unpredictable guitar pairing of Kim Gordon and free-noise guitarist Bill Nace, known together as BODY/HEAD.

Electra is a London based contemporary art organisation which curates, commissions and produces projects by artists working across sound, moving image, performance and the visual arts.

Kim Gordon (b.1953, Rochester, New York)
A founding member of Sonic Youth – where she plays bass and guitar and sings, Kim Gordon has also been involved in numerous collaborations with other artists and musicians including Julie Cafritz and Yoshimi in Free Kitten, Mirror/Dash with Thurston Moore and others including Lydia Lunch, Vincent Gallo, and Yoko Ono. With an extensive history in the world of art, both as an artist, writer and curator Gordon has maintained ongoing creative relationships with visual artists such as Dan Graham, Raymond Pettibon, Mike Kelley, Jutta Koether and Richard Prince and exhibited her own installation work across the US, Japan and Europe.