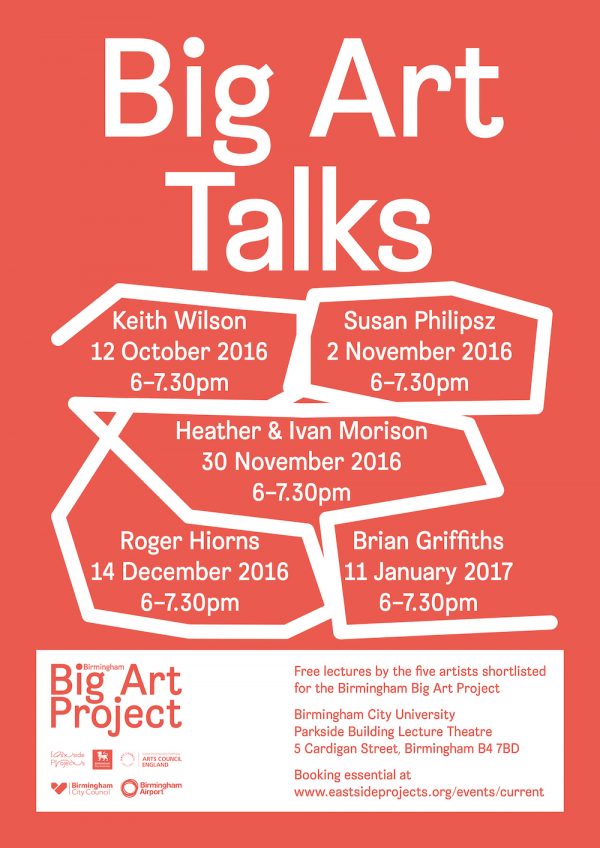 Birmingham Big Art Foundation in partnership with Birmingham City University hosted a series of keynote lectures by the five shortlisted artists leading up to the selection of the winning commission.

Each of the artists presented their vision for the Birmingham Big Art Project in relation to the important ideas and processes involved in their practice and making work in the public realm.

The public of Birmingham joined in the conversation, responding to questions such as what will make a difference to our city, what reflects Birmingham as an exciting and challenging environment for people to live and work in, which do you feel a connection to, and why?

Keith Wilson, born in 1965 in Birmingham, lives and works in New York. Wilson is best known for his playful sculptural interventions and assemblages imbued with a domestic or industrial resonance. Wilson has had major solo exhibitions at the Wellcome Collection, London (2010); Milton Keynes Gallery, (2004); Compton Verney, Warwickshire (2003); Milch Gallery, London (2001); Harris Museum & Art Gallery, Preston (1999); and Camden Arts Centre, London (1995). Over the past two decades he has contributed to numerous group shows and projects, including the Hayward Project Space, London; Institute of Contemporary Arts, London and the Henry Moore Institute, Leeds, and received numerous commissions internationally.

Susan Philipsz, born in 1965 in Glasgow, lives and works in Berlin. Over the past two decades, she has explored the psychological and sculptural potential of sound. Since the mid-1990s her sound installations have been exhibited at many prestigious institutions around the world including Kunsthaus Bregenz, Austria (2016); Tate Britain, Duveen Galleries, London (2015); Hamburger Bahnhof, Berlin (2014); The Carnegie Museum of Art, Pittsburgh (2013); Museum of Contemporary Art, Chicago (2011); Museum Ludwig in Cologne, Germany (2009) among others. Philipsz was the recipient of the 2010 Turner Prize and in 2012 she debuted a major work at dOCUMENTA 13.

Heather and Ivan Morison, born in 1973 in Desborough and in 1974 in Istanbul respectively, live and work in Herefordshire. The artists often make works for public spaces. Integral to their art practice is an active engagement with storytelling, histories, sites, materials and processes. Their work has been exhibited widely in the UK and internationally including at the Whitechapel Gallery, London (2013); Museum of Contemporary Art Sydney (2013); Tate Modern, London (2012); The Vancouver Art Gallery, Vancouver (2010); The Barbican, London (2009); South London Gallery, London (2005); Tate Britain, London (2004); and the 52nd Venice Biennale where they represented Wales.

Roger Hiorns, born in 1975 in Birmingham, lives and works in London. Hiorns combines materials to transform objects and urban situations. Hiorns has had major solo exhibitions in the UK and abroad including The Rudolfinum, Prague, (2015); The Hepworth Wakefield, Wakefield, (2013); MIMA, Middlesbrough (2012); Aspen Art Museum, Aspen (2010); The Art Institute of Chicago, Chicago (2010); Tate Britain, London (2010); Camden Arts Centre, London (2007) and UCLA Hammer Museum, Los Angeles (2003). In 2009 he was nominated for the Turner Prize with his installation ‘Seizure’, his most ambitious work to date, commissioned by Artangel.

Brian Griffiths, born in 1968 in Stratford-upon-Avon, lives and works in London. Since the late 1990s Griffiths has been making sculptures that value narrative and overblown theatricality through the use of everyday objects. He has had important solo exhibitions at BALTIC Centre for Contemporary Art, Gateshead (2015); Tramway, Glasgow (2014); Galeria Luisa Strina, São Paulo (2012) and Arnolfini, Bristol (2004). His work has also been shown as part of British Art Show 7, Hayward Touring Exhibition (2011); ‘Nothing is Impossible’, The Mattress Factory Museum, Pittsburgh (2010) and Lustwarande 08 Wanderland, Fundament Foundation, Tilburg (2008).