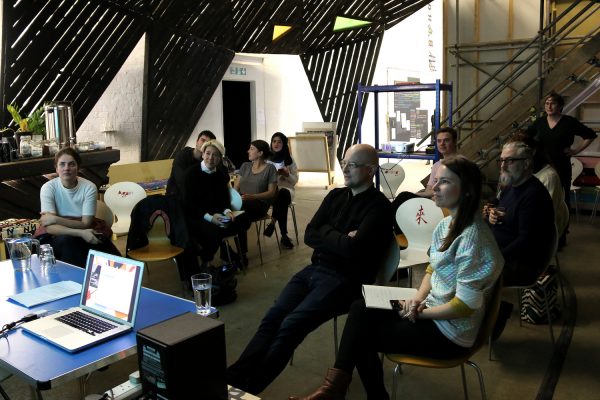 Historically, artist groups such as Cinema Action, Berwick Street Film Collective and The Dziga Vertov Group attempted to use the technical apparatus of film in order to make clear the conditions and demands of groups excluded from political discourse and broader media representation. How might this be rethought today, where anyone can (supposedly) film and distribute images online, show their working conditions, or the destruction of their community? What might an artist’s role be within this new image regime?

Artists and filmmakers including Patrick Goddard, Claire Kurylowski, members of Sharna Pax and Dan Ward discussed the methodologies they or others have employed in the production of work, assess the artistic problems it poses and what new possibilities it may allow.

This was the first of a series of events Initiated by Auto Italia in collaboration with Dan Ward, ‘JunkWorkMeatSpace’ will attempt to map ecologies of production through a collection of events, discussions and new performance commissions, taking its lead from the fantastic as well as the every day.

Where do we find ourselves now along the production line of our lives? At sea and treading water, we try to take stock of the labour we outlay, enact, let run through our fingers and attempt to avoid. As a last-ditch effort to better understand our own modes of production we come together once again and propose a collective body, an engine with multiple hearts, a brain outsourced.

As new technologies shape our understanding of what work might start to look like or be ‘JunkWorkMeatSpace’ is an exercise in untangling processes of production, seeking inspiration from existing or defunct forms of labour and imagining alternative ways artists can work together.