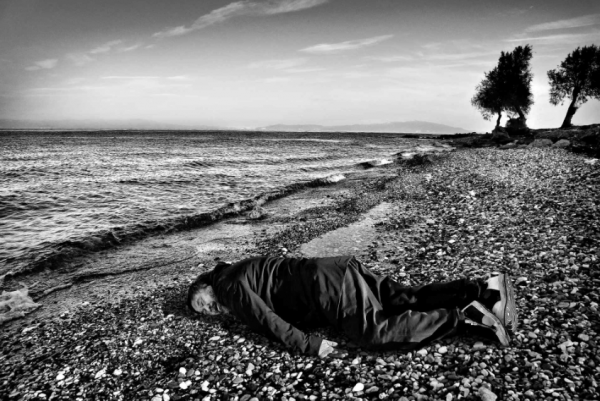 Anthony Downey, Professor of Visual Cultures in the Middle East and North Africa at Birmingham School of Art, joined us for a research seminar where he discussed Contemporary Art and Public Institutions in relation to the Refugee Condition.

If the disavowal or absence of legal and political representation before the law is a feature of being a refugee, then what happens when artistic representation is inserted into this already compromised regime of visibility?

In an all too amenable substitution that can often reconfirm the apparent absence of legal accountability, this talk will suggest that cultural forms of representation are increasingly compensating for — if not replacing — the very systems and procedures of political and legal responsibility that are being denied refugees in the first place? This culturalisation of political debate has, in turn, effected one of the key aims of neoliberalism and the logic of political exceptionalism: the de facto co-option of culture so that it ultimately answers to and performs, rather than opposes, political debate.

Anthony Downey is an academic, editor, and writer. His primary focus is on the politics of visual culture across the Middle East, North Africa, and the Global South. He has published widely on art practices and human rights, civil society and collaborative art practices, postcolonial and critical theory, and new media practices. Anthony’s broader field of research focuses on new media, art and terrorism; collective and participative art practices; human rights, bio-politics and migration; and contemporary art institutions across the Maghreb and the Middle East.

Recent and upcoming publications include Zones of Indistinction: Contemporary Art and the Cultural Logic of Late Modernity (Forthcoming, Sternberg Press, 2018); Don’t shrink me to the size of a bullet: The Works of Hiwa K (Walther König Books, 2017); Future Imperfect: Contemporary Art Practices and Cultural Institutions in the Middle East (Sternberg Press, 2016); Dissonant Archives: Contemporary Visual Culture and Contested Narratives in the Middle East (IB Tauris, 2015); Art and Politics Now (Thames and Hudson, 2014); Uncommon Grounds: New Media and Critical Practice in North Africa and the Middle East (IB Tauris, 2014); Slavs and Tatars: Mirrors for Princes (JRP Ringier, 2015); and The Future of a Promise: Contemporary Art from the Arab World (Ibraaz Publishing, 2011).