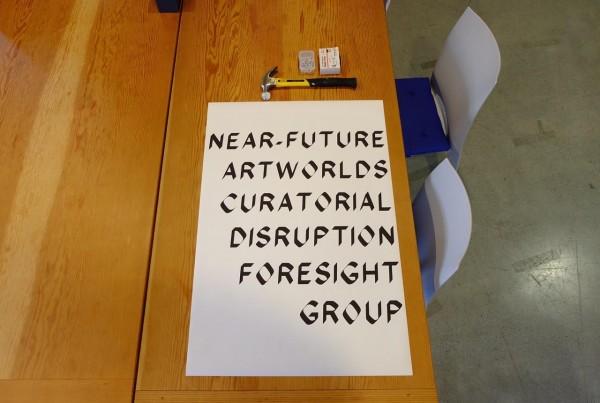 What is your perception of ESP? What role does it play in your development as a practitioner? How would you re-create the programme from scratch?

ESP developed from discussions at the first public event held in Eastside Projects, on 17 March 2008 – just days after the first wave of the financial crisis hit Wall St. Since then the programme has responded to rapidly shifting local, national and international contexts in order to grow, develop and transform along with its members and Eastside Projects itself.

The first session of the ‘Re-imagining ESP’ weekend will be facilitated by Dr Julian Manley on Saturday 14 November.

The ‘Near-Future Artworlds Curatorial Disruption Foresight Group’ is a forum for informal dialogue about megatrends and the future of contemporary art institutions.

In Birmingham the session will collectively imagine a ‘What if?’ – a post-apocalyptic scenario in which an art ecology has to be regrown from the ground up. What would be most urgent in terms of organisation, facilities, tools? The second part of the meeting will involve a practical exercise modelled to prototype initiatives that might be best suited to Birmingham’s real or imagined artistic, economic and social context.

In order to be conducive to freedom of interaction, these meetings are held under the Chatham House Rule. This allows participants to express personal views, to listen, reflect and gather insights with a clear distinction from the position of their employers and/or the policies of any associated organization. Participation is expected, but there will be no resolutions issued, no votes undertaken, and no policy statements proposed.

Founded in 2005 by Max Andrews and Mariana Canepa Luna, Latitudes is an independent curatorial office based in Barcelona, Spain, that works internationally within the field of contemporary art. Informed by an initial focus on ecology, Latitudes is especially interested in site, process and context.

On both days we’ll provide lunch and sugary snacks to keep you going. Numbers are limited so we’re asking members to sign up in advance. Please email anna-s@eastsideprojects.org by Friday 6 November to book.