THIS EVENT IS POSTPONED! 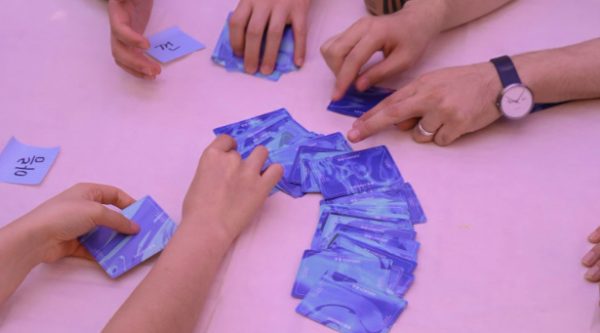 How can we work collectively to initiate social and cultural change, without surrendering our uniqueness and passions? How can we pass on what we have learned to future generations and collectives? How can these processes of sharing be generative and playful?

This meeting combines a card game with out loud readings to explore participants’ experiences of collective work, and to share ideas on building group structures that centre on reciprocity, recognition, creativity and care.

Together we will play the card game WITH, developed by CCC (Care for Collective Curatorial), and growing out of their work with six Southeast Asian artists and cultural practitioners. Structured around three themes — Connect, Care, and Coexist — WITH prompts group exploration, discussion, and speculation.  Interspersing the card game we will read out loud from texts by contemporary artists, activists, and cultural practitioners on care and access, cripping and mutual aid.

Texts, including by Johanna Hedva, Maria Puig de la Bellacasa and Tabita Rezaire, will be sent to everyone who registers, ahead of time. There is no need to read in advance as we will do so together on the night.

The Feminist Duration Reading Group was set up in 2015 to explore under-known feminisms outside the dominant Anglo-American canon. Its monthly meetings, open to all, have taken place in art galleries, seminar rooms, community centres, parks, and living rooms in London, Bexhill-on-Sea, Toronto, and Penzance, as well as online during COVID-19 restrictions, and previously in Birmingham at Grand Union. The FDRG is run by a Working Group of five and a Support Group of seven. The group welcomes feminists of all genders and generations.

Care for Collective Curatorial (CCC) is an experimental learning platform that explores ideas of care, collectivity and curatorial thinking in actualising practice. Initiated by artist Taey Iohe in 2019, the group began in London with the intention of supporting the mental health of Korean art students at Goldsmiths. CCC is interested in investigating the possibilities of building an alternative art curriculum and care infrastructure outside of institutions.

WITH, A Deck of Card for Collectivity is developed by CCC (Arreum Moon, Eugene Hannah Park, In Young Park and Taey Iohe) as part of the Ecotone of Collective Lives project, funded by Arts Council Korea.