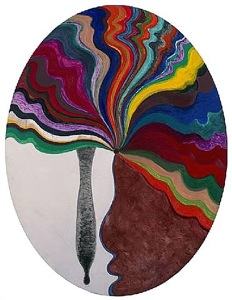 Artist & writer Simon Bill, currently exhibiting as part of Painting Show at Eastside Projects, talks about his work and it’s relationship to neuropsychology the science of visual perception, with special reference to the work of Richard Gregory. He will also introduce his new novel, BRAINS.

Simon Bill is a painter, writer and curator. He was educated at St Martins and the R.C.A. In the 90s he was represented by Cabinet Gallery and became known for a type of painting he calls ‘cock and swastika’ because of its provoking adolescent imagery – Satanism, serial killers, weird diseases. In 2000 he moved to Stuart Shave/Modern Art and began his ‘oval paintings’: an extended series of uniform size and shape (127cm/97cm oval) but wildly disparate style, medium, technique and subject. He has written catalogue essays for Gavin Turk, Gary Hume, Hilary Lloyd and others. He has recently published a novel, entitled BRAINS (pub. Cabinet II 2010), about a painter being artist.