Alicja Rogalska is an artist based between London and Warsaw. Her practice is interdisciplinary and encompasses both research and production with a focus on social structures and the political subtext of the everyday. She mostly works in context on projects that involve participation, creating situations and collaboration with others, brought to the project for their particular skill or expertise. These events and ephemeral moments act as catalysts for collective questioning, imagining, reflecting and testing different ways of being together. Being both rooted in a context and speculative, her projects aim to occupy the space between what already exists and what is possible. Alicja graduated with an MFA in Fine Art from Goldsmiths College, University of London and an MA in Cultural Studies from the University of Warsaw. She is currently an artist in residence at MeetFactory in Prague and a member of several artist-led collectives and research groups. Exhibitions and projects include: Social Design for Social Living, National Gallery (Jakarta, 2016); All Men Become Sisters, Muzeum Sztuki (?ód?, 2016); Myth, Artisterium, Europe House (Tbilisi, 2015); Rehearsal, National Museum (Kraków, 2015), No Need For References, Kunsthalle Exnergasse (Vienna, 2015), Critical Juncture, Kochi­ Muziris Biennale, (Kochi, 2014); Avantgarde and Socialist Realism, Teatr Nowy & Muzeum Sztuki (?ód?, 2014); A Museum of Immortality, Ashkal Alwan (Beirut, 2014), Institute for Mathematical Sciences, Flat Time House (London, 2013); General Strike, Mews Project Space & Art Review (London, 2013); Melancholy In Progress, Hong-Gah Museum (Taipei, 2012); Jour de Fête, The Private Space Gallery & LOOP Festival (Barcelona, 2011); To Look is to Labour, Laden Für Nichts (Leipzig, 2010) and No Soul For Sale, Tate Modern (London, 2010). 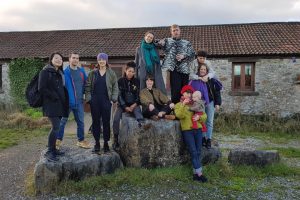